Rogues are elements of the night, master thieves and scoundrel... um, for the most part. Yes, they have a tendency to fling their swords when they are drawn from their cloaks... but otherwise they are as shadows, invisible and deadly!

Sorcerers are an odd lot who constantly drink and smoke a variety of substances. Some say they indulge to heighten their magical abilities, while others think they engage in debauchery to repress them...

Strong and  brave, gladiators hit hard and eagerly seek new challenges. Their brawn to brains ratio is very high, but what would you expect from adventurers who get hit in the head for a living?

Beastkeepers possess a heightened attunement to animal life and have a healthy respect for the power of natural creatures. They have been known to tame beast companions through little-understood inherited magic.

Elementalists are blessed (or cursed) with the ability to draw and direct the raw power of their surroundings. Often treated as dangerous outcasts because their abilities can manifest randomly, they are often turned away or thrown in prison.

Consummate professionals and trained killers with a loyalty tied only to their contract. Despite their grim trade, Assassins are largely amoral and view killing as their job — one that demands their skills be honed to deadly sharpness.

Trained as much in the alchemist's shop as in the marksman's arts, Musketeers are experts in the art of creating explosives. They pride themselves on their high level of skill with their often imprecise and idiosyncratic weapons.

Performers and jokesters with a penchant for trickery, Harlequins are mysterious figures that hide behind masques and vivid clothing. They deal in hidden gags, misdirection, magical illusions, poison, and other devious skills.

A good mix of power and speed, the shortsword is a versatile weapon for any adventuring scoundrel.

Not so much a weapon as a focal point for the innate powers of magic users, wands are powerful yet brittle.

Nothing beats a massive weight attached to the end of a sturdy grip, though it has a considerable wind-up because of its bulk.

Sturdy and dependable lengths of cord that bite deep into foes and emit frightening cracks of sound.

Gnarled canes used to draw out and unleash power from the very core of the natural environment.

Knives, daggers, or any one of various other precise, silent, and above all deadly, small weapons.

Rudimentary guns that fire bullets, shot, and other projectiles... also prone to exploding if used by the wrong hands.

Gadgetry that springs forward to hit enemies with a huge variety of attachments for fun and profit.

Tales exist of cataclysmic battles in ages past between beings of immense power, their wrestling causing both creation and destruction. These tales have been shrouded in the mists of time, but may be more real than any dare believe…

The land surrounding the great mountain spire was sullen and poor for growing crops. The first intrepid adventures to brave the sheer cliffs of the great peak told of a spring that produced water of unsurpassed purity, seeming to jet up through the great height of the mountain. Small samples of this water cured diseases and caused otherwise barren soil to produce great harvests.

In the ages since, the people of the realm have built upward to the fount from the base of the spire in an effort to route the saving water from its undiluted source. This has continued until the present day, with the High Throne of the King now occupying the very topmost level of the centuries of architecture layered up the mountainside.

However, as progress was made toward the great peak the older, lower levels were slowly abandoned. Each epoch in the history of the mountainside city brought with it different architectural trends as well as the slipping of its preceeding structures into decrepitude. 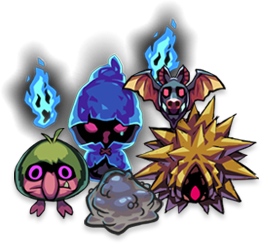 Spore-spawned golbins, ancient constructs, ghosts of previous adventurers, and even the living rock of the mountain spire itself are but a few of the dangers to be faced. 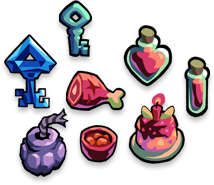 An adventurer’s wits will only take them so far – survival will depend on potions, weapons, explosives, arcane relics and other objects of untold power.

The King of the realm has ruled for generations and is the sworn protector of all subjects within his lands. His seeming immortality and a highly eccentric nature have a habit of raising eyebrows within the court.

A dark, mercurial substance with unique and devious properties, Murk dissolves and absorbs most objects contact. It is rumored that its manipulation forms the basis for the most powerful spells and weapons.

Keep in touch with Delver’s Drop: